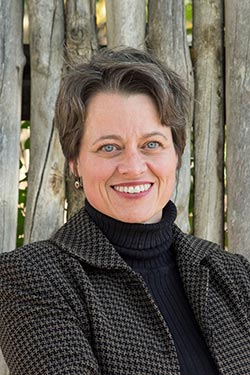 Lisa O’Brien Lisa O’Brien was raised outside of Detroit Michigan to a family that embraced activism, campaign involvement and volunteering. Upon graduating from college, she worked in both hospital and jail settings as a mental health counselor, that led to her master’s degree study in Social Work, with an emphasis in Community Organizing.

In a leap of faith move, Lisa moved sight unseen, to Taos with her husband Patrick, and son Conner in 1995. Since living in Taos, she has held positions as a Volunteer Coordinator for the Court Appointed Special Advocates (CASA) program, a Crisis Responder for Community Against Violence and Executive Director for Child-Rite. Joining the TCF team in 2007 as the Grants Director, Lisa established a strong position in streamlining the organizations grantmaking process and donor engagement services, while recognizing the important role that non-profits play in addressing the deep needs within our community. She came into the Foundation Director position in the fall of 2016. Lisa is an avid composter, gardener and bee-keeper. When not tending to the “farmette”- she spends time quilting, knitting and reading cooking magazines. She is a member of Taos Milagro Rotary Club, Los Jardineros Garden Club, Taos Native Plant Society, PFLAG and the Taos County Quilting Guild.

Keep up with our latest news.
Sign up here