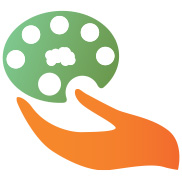 Our cultural sector is the heart of our community identity and not an extra part. It is through the support of our music, our literature, our art, drama and dance that we tell the story of our past and we express our hopes for the future.

Taos Center for the Arts                                            $10,000
|
The TCA’s newly refined mission statement is a guidepost for strengthening the civic vision of the TCA as it focuses on film, visual arts, and performance within the community. The TCA is seeking to become clearer in a sense of its past in order to better include others within Taos now and in the future. Their path toward that is to engage in active working partnerships and collaborations in their programming.

Taos Onstage was founded in 2013 with the conviction that live theatre serves a vital role in the community, allowing for creativity and shared giving. In September 2018, Taos Onstage leased a new home on the corner of Camino de la Placita and Paseo del Pueblo Sur, the southern gateway to the Historic District. The former retail space has been converted into a performance venue with a seating capacity of 60-80 people, and extra rooms for workshops, and classes, thus enabling them to expand their productions, strengthen partnerships, and make Taos a thriving theatrical center for locals & visitors.

Thank you to our generous Donor Advised Fundholders that participated in this years grant cycle.

Keep up with our latest news.
Sign up here